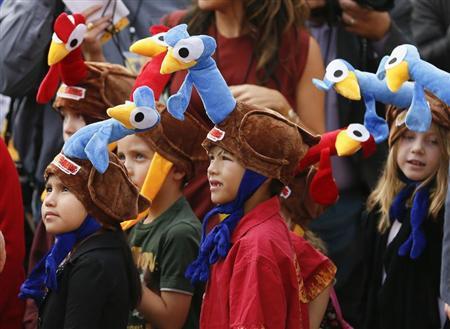 LOS ANGELES (Reuters) – As the United States whets its appetite for a big tasty feast on this month’s Thanksgiving holiday, two turkeys are on a mission to save their kind from slaughter in a new animated adventure, where they travel back in time to get the birds off the menu.

“Free Birds,” out in U.S. theaters on Friday, follows the tale of Reggie (voiced by Owen Wilson), a lone turkey pardoned by the U.S. president and saved from becoming Thanksgiving dinner. Reggie, accustomed to being alone, is forced into a time-traveling adventure by another turkey named Jake (Woody Harrelson).

Together, the pair go back in time to the first Thanksgiving to try and stop turkeys from becoming part of the feast, and Reggie learns how to become a part of a team.

“I think that every kid goes through that pressure to fit in,” Wilson said. “I think that the way this movie addresses that in thinking about your kind of fellow man, that’s kind of a nice message in helping other people and not always putting yourself first.”

The film comes ahead of the U.S. Thanksgiving holiday on November 28, and according to the film’s writer-director Jimmy Hayward, “Free Birds” fills a gap in the holiday film market.

“There are no Thanksgiving movies. Maybe that’s for a reason, but it really struck me as that was missing,” he said.

As Reggie and Jake travel back in time to the 1600s, they come across a flock of agile, fast turkeys already staying one step ahead of the human settlers looking to hunt them.

“She’s kind of a fun character to play in animation, one that I hadn’t really played before. She’s a very serious, steadfast, natural leader, no-nonsense kind of turkey. One that is certainly the smartest one of the bunch,” Poehler said.

While “Free Birds” touches on the origins of the U.S. Thanksgiving tradition, Hayward said he didn’t want the film to become a historical lesson for the film’s intended young audience.

“Kids go to school all week, and when they come to the pictures, I didn’t want to turn it into a school lesson,” the director said.

“There’s a lot of stuff about Thanksgiving that’s not that nice, there’s a lot about the settling of the United States that I couldn’t show,” he added.

Capitalizing on a slow month for children’s animated comedies, “Free Birds,” made for $55 million, is projected by box office forecasters to collect between $14 million and $22 million at the North American box office in its opening weekend. Relativity Media is distributing the film.

Hayward said he hoped the movie would appeal to children and adults, and that they would take away a moral message to reflect on for the festive holiday season.

“My agenda for this movie was to make an emotionally fulfilling, very funny buddy movie that had a great message to it, and the message has nothing to do with food. The message is that you’re part of something bigger than yourself,” he said.

But if you’re looking for any trademark turkey ‘gobbles,’ the cast said they didn’t have to learn how to make the gurgling turkey sound because the turkey characters communicate through talking.

I hope that you will find the information helpful, useful and profitable.

The information in this ebook on travelling is organized into 16 chapters of about 500-600 words each.

I hope that it will interest those who like to travel or who are looking for somewhere to go on the next vacation.

As an added bonus, I am granting you permission to use the content on your own website or in your own blogs and newsletter, although it is better if you rewrite them in your own words first.

You may also split the book up and resell the articles. In fact, the only right that you do not have is to resell or give away the book as it was delivered to you